Those of you who know me personally know that I am a member of "Llamas Anonymous." It is a support group for those of us in the Baton Rouge area who are addicted to the card game Dutch Blitz...which we have affectionately renamed...you guessed it..."llama."

Some of the group got together on fourth of July to celebrate the country's independence by playing llama into the wee hours of the morning. It was great fun. Shouting "LLAMA" as you throw your last card down to win the game is sooooo invigorating!

When I went to Peru last year I had the pleasure of meeting a real llama. I met a bunch of them actually and we had lunch together...OK it was more like I fed them, cause I just can't bring myself to eat raw alfalfa. Here is the proof...me with a 100% real, living, breathing llama. 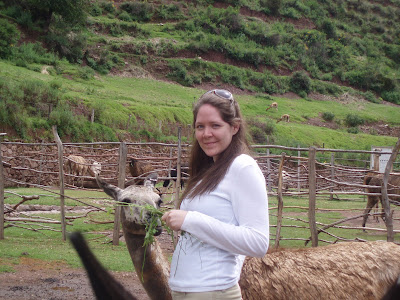