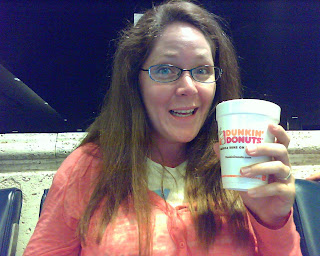 Well things have been a bit more nuts than usual this week. I am actually in route to Louisiana right now. It is 4am my time and in about 12 hours I should touch down in New Orleans. HHIM has been blessed incredibly by a donation of medical supplies and office equipment from my mom's office building. Dr. Martin and I are on our way there to pick out the things that we would like to ship to the clinic!
How incredible that God should choose to use us in this way. I am so excited that my mom is working on this and that she is sowing seed into the ministry in Honduras! I will try to keep you posted on the happenings while I am here. We will be working, working, and working!
On another note, the Canadian team is leaving today as well. Dr. Martin and I had to miss thier closing meeting tonight but we were with them in spirit. They have been an incredible team the past 8 weeks and it is going to be so strange to return home and not have them there.
I pray that God will continue to speak to them about missions and about the world. I pray that this experience will continue to guide them and challeng them and they begin to make big life decisions, and try to answer life's big questions.
So if you are praying :) please pray for safe travels for Dr. Martin and I as we head to New Orleans and Baton Rouge to take care of business. We are so excited about what God is doing and He is doing it FAST and BIG!
I love you all and I am sorry for the lack of blogs this week, but with the Canadians leaving, the container packing and the power being out I haven't had much to work with :).
at 5:10 AM 2 comments:

Tonight was the last Wed. night church service for the Canadian group. They have been here 7 weeks and it is time to start preparing our hearts for closing time. God has given us an incredible opportunity to be a part of 18 lives. There have been many hours of planning, praying, fasting, preparing, managing, cooking, painting, meeting...the list goes on and on. This has been our lives for 7 weeks so life is getting ready to change, big time.
We are closing one season to enter into a new one. I pray that God is with us as we make the move, that He guides us and guards us. I pray that He is with the kids as they return home and that their transition will be smooth...but not easy. I pray that they don't forget what they have learned here. I pray that God will speak to them for years to come about the world outside of Toronto, Canada and that they will remember their time here.
It will be sad to say goodbye, but I am so looking forward to the busy summer season. I know the best days are yet to come and I am so excited to see what God is going to do in the upcoming months! Please continue to pray with me, to lift us up...we can't do it without you!
at 9:14 PM No comments:

That's right...tomorrow morning Allison, Claire and her brother Daniel, and I are heading to Copan with the entire Canadian bunch! We have been looking forward to this trip for weeks now and it has finally arrived.
The bus will arrive at 6am tomorrow to pick us up and take us on the 7 hour drive across the Honduran countryside all the way to Copan, which is on the Honduras-Guatemala border. The kids are in for a 3 day tour of some of the oldest buildings in Honduras and by far one of the most spectacular displays of Mayan architecture.
So please pray for our safety on the road and in the city of Copan. And pray that God will speak to the hearts and minds of all who are on this trip. The ruins are a piece of history, but they were also a place of sacrifice and idolatry. I will be praying for a thick spiritual covering for all of us. I don't want anyone to come away confused.
This also means that the Canadians have less than 2 weeks left here in Honduras. Wow. I can't believe the time has passed this quickly. It seems like it was just yesterday that Wendy and I were up late planning their 2 month cultural experience, and now it is almost over.
I will be pressing in for them big time as they near the end of their time. I know there must be a 1000 different things going on in their minds right now. They are are here but thinking about home and when they get home they will be thinking about here. I pray that their transition back to home life is smooth and that they will continue to be fully present for the last part of their stay.
at 5:29 PM No comments:


So the girls (Rachel, Claire, Alli and I) had a sleep over a few weeks ago! We watched a girlie movie and Allison made us a grea pancake breakfast! Here we are all sleepeyed at the breakfast table... the only thing that would have made this morning any better is if I could have eaten pancakes in my bed!! 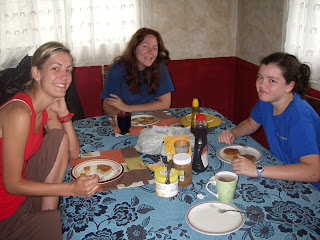 So today we had the youth group from the Church of the Nations in La Ceiba come up to hang out with the Canadians. We planned to cook hot dogs, play Frisbee, cut some watermelons and of course swim in the river!
As we woke up this morning and began preparing for the day...we realized that the power was out. No big deal because the lights go out frequently here in the summer due to rolling brown outs and when the electric company is working on the lines. We fired up our gas stoves and started baking cupcakes without a second thought.
Once the cupcakes were baked, iced and the hot dog buns were sliced we decided to start cooking the dogs.
Me: "Hey Wendy...where are the hot dogs?"
Wendy: "They aren't in the fridge?"
Me: "No, they aren't in the freezer either!"
Wendy: "You mean we don't have hot dogs?"
Me: "I guess not...did we lose a box on the way up the mountain?"
Wendy: "I don't think so, everything was tied down tight when we got up the mountain."
Me: "Uh oh."
So we had an entire youth group on the way for a cook out with no meat! oops. So as of now...Martin in on the motor cycle headed down the mountain to buy more hot dogs. The youth group has arrived and they have no idea all we have are empty buns and cupcakes.
Let's hope Martin gets back before they get too hungry!
haha
Such is life. You just have to roll with the punches around here. It doesn't do any good to get upset. Especially when you have a bunch of teenagers running around, because they pick up on your moods so easily. We can't have an outbreak of hot dog panic spreading through the crowd!
So the lights came back on for long enough to start typing this blog...and then went back off again. So hopefully by the time they come back on we will have hot dogs on the grill and a bunch of happy teenagers and a posted blog.
.........................
5 hours later
........................
Martin returned with the hot dogs in time to save the day! The Canadians did a great job coming up with games to play with the youth group from La Ceiba and they had a blast. I think they will all be talking about it for days!
Thanks for keeping up with the blog! Today was a great day of relationship building with a local church! I can't wait to do it again!
at 1:01 PM No comments: