I have learned a lot this week. I had a day off...I wasn't sure that I knew what it felt like anymore. Dr. Martin gave the staff a day of rest last Thursday, and I was so thankful. I don't know what it is...I hate the idea that I would need a day off. Does that make any sense?

I guess it is my pride that keeps me thinking that I should be able to do it...or it is the Enemy who tells me to keep going and ignore all of the warning signs.

Every now and then I forget that we are in a spiritual battle here. We are in a fight to keep our sanity sometimes, and have to go back to the basics of truth. We have to remind ourselves what is true and what is not.

Please, don't go another step forward without coming back to the truth of the matter. God loves you. He cares about you...not just in an employer-employee relationship, but He really cares about your heart, your head, and your body.

This week was a great reminder that God's work will continue to get done. None of it is dependent on one person. We are integral parts of the team, but the team looks out for each other. So I wanted to say, "thanks" to Martin and Wendy for giving me a day to get some personal things done. I went to the city and bought a mattress for my new bed and I did a little shopping. :-) It felt great to get some things scratched off of my personal list.

The HPC Construction team just left, and we are welcoming a team from Jubilee Church tomorrow afternoon. We are 5 teams into our 6 team stretch and our season of 10 summer teams. God is doing so many things around us! It is amazing how much is getting accomplished. Praise Him!
at 7:27 PM No comments:

Rebecca snapped this photo of Jairo and I the other day in clinic! I just wanted to share it with you guys :)
Thanks for posting it Becca!!
at 8:44 PM No comments:

Day in the Clinic

It has been a while since I was able to spend some time in the clinic. I did a little bit of translating today for the nurse practitioner, Eric McCraney. He did an amazing job diagnosing and teaching the patients about their conditions. It felt really great to be with the patients.

There was so much pressing.

Food to put out.

Plan for the next team.

But then...in the midst of the craziness. I see two of the people that always steal my heart right out of my chest.

One, an 18 month old boy named Jairo. He was not wanted by his mother. She barely fed him, and hardly ever touched him. A woman took him in as her son, and brought him to us for help. He is thriving now...although he was sick with a fever today, he was clean, clothed and well fed. Weighing in at 20 pounds! I took him into my arms and held him until he fell asleep, resting his head on my chest.

Another, a 17 year old girl named Elsa. She is from the village of Paraiso. We saw her for the first time at a brigade in her village in March. She is disabled, mentally and physically, so she was left by her mother...and gets passed around between "family" members. She was brought to the brigade because she wasn't having a period, and her care taker was concerned that she was pregnant. Thank God, she was not. We saw her a few days later at the clinic, and determined that she wasn't having her period because she was severely malnourished. He lower legs were 3 times their normal size because of her protein deficiency. We gave her baby formula, because that is all we had to supplement her. We gave her and her care taker clothes, soap, shampoo...anything we could give them to bring her back to see us. Today she came, and she had gained 4 pounds! Her legs were no longer swollen, but she still wasn't having her period. Another pregnancy test, another negative, Praise Him!

While we were waiting for her test results, I took her to the patient bathroom and we brushed our teeth together. I showed her how to brush and we talked about when she needed to do it. She picked out a neon green toothbrush. She was so excited. My heart broke and was put back together and flew right out of my chest again.

Thank you Lord, for today. Thank you for letting me see the fruit of your work in Jairo and Elsa. Please bring them back again. Let us care for those who have your heart.

I wish I had pictures to show you. Maybe one day I will get the courage to ask Elsa to take one with me. I feel that our relationship is too tender...I do not want to exploit her. She is a doll, and makes my heart smile at her gentleness. I wish I had her heart...so ready to love others. So quick to smile.
at 10:50 PM 1 comment:

This past week we had a team from The Life Church in Memphis, TN come and serve with us in Honduras. They helped us roll out our new education program for the students in our area. This program involves 3 stations with hygiene related activities, one art project, games and a creative gospel presentation.
The last day the team was with us, we had the honor of traveling to the village of La Colorada. This day was special for so many reasons, but one that stands out to me is that we were able to serve 2 schools at one time. There is a village deeper into the jungle than La Colorada, at least 2 hours deeper in, called Los Planes. The teacher from this village brought 20 students of all ages, plus 7 graduates from his class last year, down to La Colorada to participate in our program. 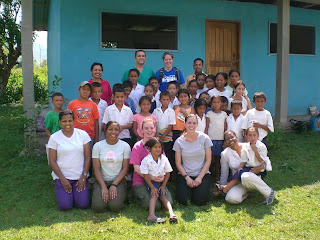 This is a picture of all of the students, the 2 teachers, and our team from Life Church. 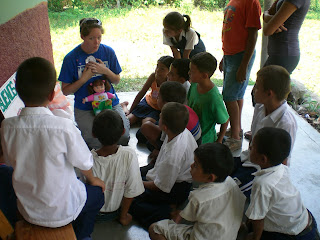 Here the kids are learning about healthy eating...and YES...that is the "Healthy Heather" doll!!! But we renamed her "Sarita Saludable" so the kids would understand the rhyme in Spanish :) Here the kids are coloring pictures with hygiene related items. Even the boys enjoy this simple pleasure of making something pretty. 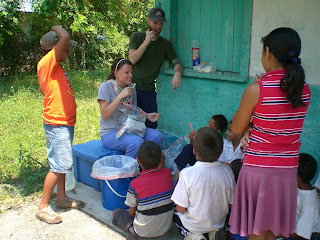 Here Rebecca and Michael are teaching the kids how to brush their teeth. The kids actually do the activity so that we can show them how much tooth paste to use and how to brush the right way.
We have plans to further expand the program, and when we have larger visiting teams we will have more hands to help with bigger schools. I am so excited about what God has in store for these kids this year. We hope to reach every school twice with the education program, and help the teacher with small repairs to their classrooms and give them donated school supplies.
at 10:36 AM No comments: