Wow, what a weekend!

I have had quite an eventful few days! Over at the Williams House we prepared for the Christmas season by decorating the tree. We played Christmas music and ate chocolate covered pomegranate from Dr. Martin's chocolate stash. It doesn't quite feel like December here, so it is nice to have the tree to get us in the spirit. 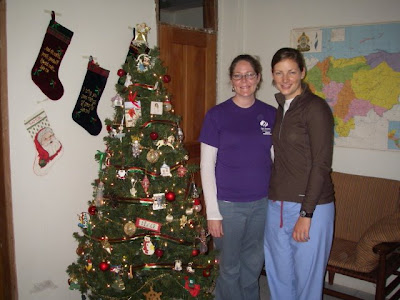 A few days after decorating the Christmas tree Allison and I ventrued down past a village called El Naranjo to a white water rafting place to get some ideas of fun things to do with our teams. We were going to "resear
ch" the river rafting trip on the Cangrajal. But to our dismay we had missed the trip by like 10-15 minutes. So after a tour of the facilities we decided to trek up the mountain to Las Mangas. We have some new friends there who grow food for some of the orphanages in the area.
You can't call someone to let them know you are going to come over...or even ask them if it is a good time, you just kind of show up. God's timing is always perfect and just as we arrived in Las Mangas they were headed up the mountain to see us...go figure.
They wanted to take a look at the clinic but everyone was in La Ceiba that day so they would have been out of luck.
We regrouped and decided to tag along with them to visit an orphanage in El Naranjo where they deliver food. We got to spend some time with the kids there and then decided to take them on a little hike. The kids knew where a real bat cave was...I was like ok...we are going to take 10 kids into the mountains to a bat cave? But in reality the kids took us! Ha! They climbed the mountain in sandals, flip flops, and shoes that were either way to big or way to small. We each had our own private mountain guide as they held our hands and showed us the best way to navigate the rocks. 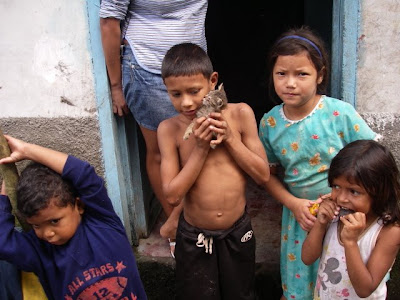 We made it to the bat cave...and there were no bats, thank God! The kids had fun climbing up the rocks and taking pictures. They had little flash lights and were looking in all of the cracks to see if they could find the elusive bats. It was great to be with the kids. I felt like I was in Africa when I pulled out my camera and they went nuts! I guess kids are kids no matter where they live! 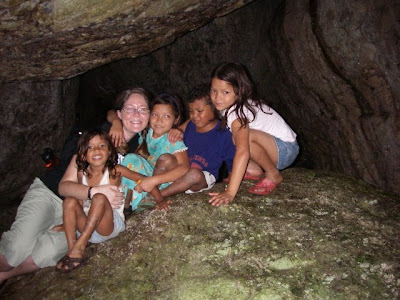 After the bat cave we took all of the kids to a swimming hole where they had a blast jumping off the rocks and letting us swim them across from one side to the other. The water was absolutely beautiful, clear blue-green and COLD!! 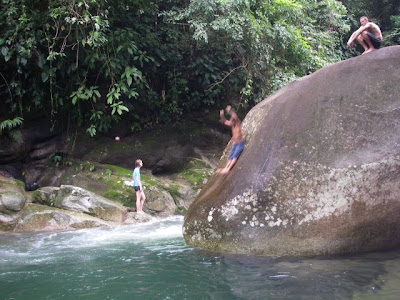 After a good swim Allison and I said goodbye to our friends and started walking up the mountain to Rio Viejo...and hoping the bus would come by soon and pick us up. With no bus in sight, we flagged a ride and hopped in the back of a truck. Since the bus is not always reliable, the people here do a lot of hitch-hiking. You pay who ever picks you up about half as much as the bus would cost and they let you hop out at your village. We were glad for the ride, because it had started to rain and we had a long walk ahead of us otherwise.
We arrived at Rio Viejo after about 20 minutes in the truck and headed back to our casita to cook dinner and talk about our day. Since we missed the rafting trip that day, we made plans to catch one at the same time the next day. So we went to bed early and woke up to catch the 7oclock bus down the mountain...round 2. 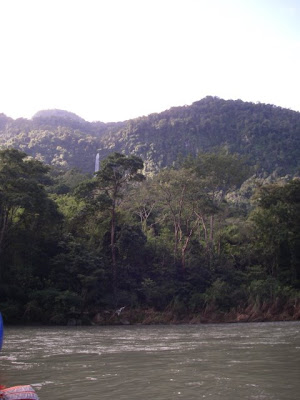 We made it in plenty of time to get to know our guide, Miles, and the two people who were rafting with us. Once we were all suited up for the trip we jumped into the truck and headed out to the river. We had a great time on the raft. We went over some sweet class 4 and 5 rapids and everyone made it out alive. The boat never flipped and no one fell out! Cheers mate...as Miles would say. 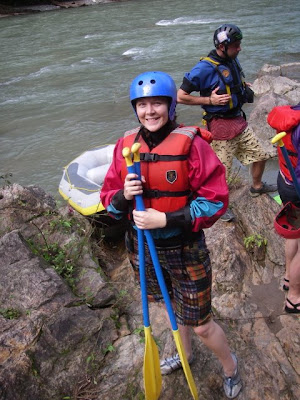 After the rafting Miles let us float down the river a bit on our own...a solo mission. So we all jumped back into the river and assumed the white water float position...which looks a bit like you are sitting in an invisible recliner. So there we went 4 gringos floating down the Canrejal river. I think I swallowed a half cup of river water, pray that I don't get amoebas!
So, this has been a very adventurous weekend! We start clinic tomorrow morning at 7am sharp!
at 10:24 PM