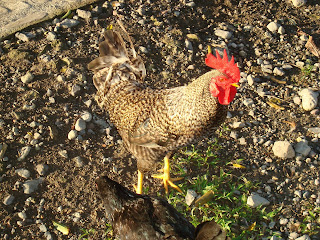 It all started when one chicken was found dead in the back yard of the HHIM Medical complex. There were definitely signs of a struggle, as there were feathers surrounding the crime scene. No suspects had yet been considered, as the shock was still too new.
The very next day, four precious pollos were found dead in the side yard between the Williams' new residence and the dormitory. Again signs of a struggle were present, but we noticed something very peculiar...the chickens were still there...where they fell dead. So what ever killed them, wasn't trying to eat them. The suspects narrowed.
When the neighbors were questions about any suspicious pollo activity Senora Consuelo mentioned that she had seen the clinic dog Kaiser chasing a rooster a few days before. The story was confirmed by Wendy who saw Kaiser that afternoon with an innocent look on his face but feathers stuck to his bottom lip. The rooster managed a narrow escape that day, but was unfortunately not as lucky the second time around. 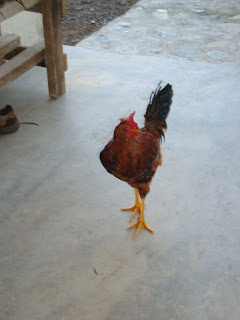 Before the animal could be quarantined, another chicken was found dead. Again it lay amidst a pile of feathers but otherwise intact. That evening 6 eye witnesses saw Kaiser and Dot (the "innocent" puppy) corner a chicken and use strategic double-teaming tactics on the poor soul. Fortunately for the chicken the attackers were called off by the onlookers and the chicken was spared. 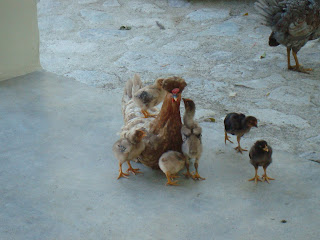 So after a killing spree that left 6 chickens dead the murderers have been separated. The authorities feel sure the murders were the result of Dot being allowed to sleep outside with Kaiser and the two "innocent" doggies getting bored during the night. Dot has since been locked up in the evenings to prevent further chicken killings and to prevent the two from moving to a more challenging prey...the clinic cats. 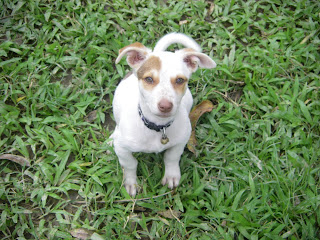 Dot the innocent
So farewell chickens. If there is a chicken heaven you deserve to go there, I guess. Even though you did poop all over the porch, lay eggs in my shoes, and peck me when I walked by you. All is forgiven, and I will try and take good care of the chicks you left behind by occasionally feeding them corn. I will however continue to chase them off of the porch.
Antonces, adios pollitos. Que la via bien! 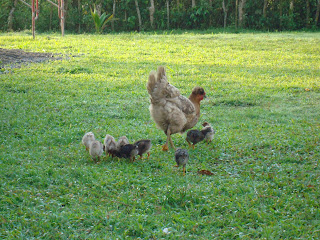